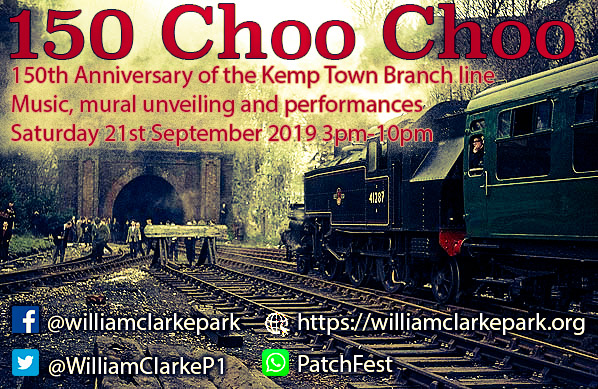 The Kemp Town branch line opened on the 2nd August 1869.  So we are going to celebrate it.  If you can't make it there is a display in the Jubilee Library of various materials.

Expect an unveiling of a railway themed commissioned mural, music, performances along the lines of a usual Patch event, but railway themed!  The mural is a series of three such murals.

Look out for electronic music acts that will evoke the atmosphere of the golden days of steam and how the land the park occupies may have felt like.  We will use projections using equipment kindly loaned from The Sallis Benney Theatre and lighting to help transport the audience.  We are making some recordings of locals who remember the railway and that have consented for use in the performances. These will be posted asap on soundcloud for use in the performances as samples.

If you know of anyone who has any stories around the branch line and who is willing to be interviewed, then we are interested in that.  Some have already been made and are available at http://patchfest.news/railwayinterviews

There will be two sections of the event.  First part (4pm - 6.30pm), is live music entertainment.  Details tbc.

Second part (6.50pm - 9.30pm) - super special news, Ian Parton from The Go! Team will be spinning records during the intervals!  Then various sets consisting of ambient/electronic acts accompanying projections of various Kemp Town railway footage, such as from http://www.dumpman.co.uk films, archive footage and more.  A procession will form during that later part of the evening.

We'll be showing an adaption of the excellent footage that Dumpman caught in 2007, amongst other footage.

A bar serving drinks will operate a Challenge25 policy.

All subject to weather.

Bands and acts confirmed for the event:

6.50pm - 7.10pm Resonant Blue https://resonantblue.bandcamp.com/
Resonant Blue is producer/DJ Jake Smith who has been creating and releasing electronic music for over 20 years. He released the first ever US drum and bass album 'Homebrew' on Reflective Records in 1995 as Subtropic and has been producing a variety of electronic sounds ever since including music for galleries, film, radio and TV. He currently works with Brighton based label Lift Music producing music for a variety of media.

7.20pm - 7.40pm Simon from Astral Engineering
Simon will be refactoring ambient dub tunes for the event.  New Album is released on the same day as the event.  Simon is a member of Ja! Sputnik, a Brighton based band producing motorik and spacerock influenced music.  You can often see them at the excellent Psychedelic Sundae Event at the Green Door Store, next on Sunday 8th December.

8pm - 8.20pm Fane https://www.facebook.com/thisisfane/
Fane's music is a Gnostic mix of folk, ambient, electronic and drone influenced by the forgotten places and times that surround us. Meditative drones, corrupted banjo and squeezebox and lo-fi electronics, and the occasional song about Stonehenge.
Fane's first full-length album 'Follow The Map' was released on CD and download via Ceremonial Laptop in December 2018.

8.25pm - 8.45pm Procession ending in something spectacular! With the technical assistance of Same Sky no less, the outfit responsible for Burning the clocks!!!

Here's a local band that have made a track in the spirit..

A relativley new event for the Patch

The main focus for the Events group each year is planning for the Spring Patch Picnic, the summer PatchFest and Winter Warmer events.

If you are interested in getting involved with planning any of these, please get in touch.  We welcome new faces, new ideas, new energy. Please feel free to get involved contact This email address is being protected from spambots. You need JavaScript enabled to view it.

Our Events Group organise up to three main events each year.

All our events rely on the time, skills and energy that members and supporters can offer. If you can help out with planning or on the day - bake a cake, staff the tea tent, supervise the bouncy castle or help with setting up the site, we'd welcome your involvement. 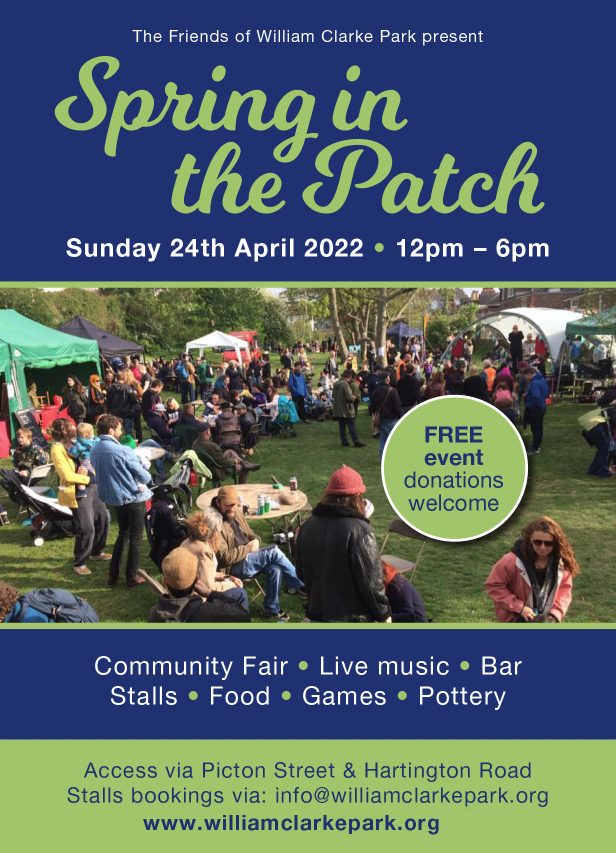 * Please no dogs at the event

Spring in the Patch programme